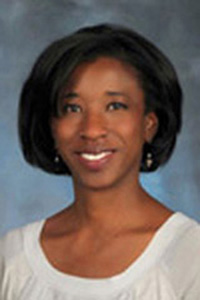 Tracy Johnson is a biologist and educator who studies how cells synthesize, splice, and process RNA to regulate gene expression. Studies from her lab lay the groundwork for explaining why the splicing of genes is tightly coupled to transcription, as well as how the chromatin state of a cell influences splicing. Her findings have important implications for understanding how changes in chromatin caused by development or environmental perturbations alter gene expression via splicing changes.

In eukaryotic cells, noncoding sequences called introns interrupt the coding regions of genes. A key challenge in molecular biology has been to understand how the machine that excises introns, the spliceosome, undergoes the dynamic rearrangements necessary to recognize introns and catalyze their removal. Understanding the mechanistic details of this important reaction has become even more challenging in light of evidence that the spliceosome assembles on a nascent RNA transcript as it is still being transcribed. Studies from Johnson’s lab were among the first to show that specific histone modifications—both the acetylation and deacetylation of histones to alter a cell’s chromatin state—and the spliceosome are coordinated to achieve correct splicing of genetic material.

More recently, Johnson’s lab has delved further into the link between histone biology and the spliceosome, and shown that a protein complex involved in RNA splicing also influences co-transcriptional histone H3K36 trimethylation, providing evidence of a reverse relationship between RNA processing and chromatin. Overall, her work illustrates the functional coordination that occurs in both directions between RNA processing and the state of the chromatin.

Throughout her fourteen years as a University of California professor, Johnson has also focused her energy on developing effective strategies for providing a transformative learning experience for undergraduates. For example, her innovative, upper-division molecular biology course manages to provide a personalized, inquiry-based experience for students, despite its enrollment of more than 300. While considered a difficult class, it has garnered awards from students. Lectures involve multimedia presentations, extensive student engagement, and analysis of primary data. In 2013, she was presented the Chancellor’s Associates Award for Excellence in Undergraduate Education.

Johnson has also mentored and trained 25 undergraduate researchers on a more individual basis, involving them in her research program and helping them author research papers. Her students have gone on to prestigious graduate and professional schools and consistently voice their appreciation for her commitment to their success. Johnson has a particularly strong record of training outstanding undergraduates from underrepresented minority groups and, in 2011 and 2012, was named “Most Outstanding Faculty Member” by the African-American Student group at UCSD. For her achievements in integrating high-level research with excellence in undergraduate education, she has also been awarded a National Science Foundation CAREER award and the Presidential Early Career Award.